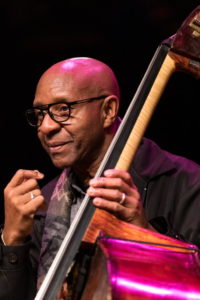 During the past 40 years, Nat Reeves has been one of the top bassists in jazz. His supportive and stimulating playing has uplifted a countless number of sessions and recording dates (most notably with the great altoists Jackie McLean and Kenny Garrett) and he has led his own CD State of Emergency. Both as a performer and an educator, he has made a strong impact on the jazz world.

Nat Reeves was born and raised in Lynchburg, Virginia. “My grandfather played the banjo, mandolin and guitar. One day I picked up his guitar and started playing the bass part. He noticed and, for my 16th birthday, he bought me an electric bass.” Nat had grown up hearing bluegrass, rock and soul records but did not get an opportunity to listen to jazz until he was already a bassist. “As a teenager, I listened closely to the radio, learning everything by ear. Originally I gravitated towards soul artists such as Marvin Gaye and the music of the time. In high school, I worked for a time with a band called the Dynatones. We learned all of the top 40 songs as soon as they came out. Whenever a new hit record was released, we would purchase the recording, go in the basement, put it on the turntable, and learn the song. Quite often the same day we would play the song for dances.” 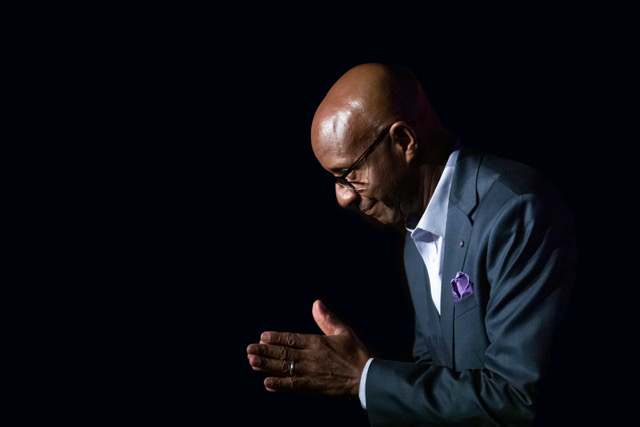 Nat admired Stanley Clarke, Jaco Pastorius and all of the top electric bassists of the time, being interested in all of the styles. “As a bassist it is my function to concentrate on the foundation of the band and make everybody else sound good. To become a better bass player and learn more about the instrument, I started listening to jazz. In jazz there is much more freedom to create one’s own bass part and to develop my own bass sound. It is my job to always learn and not merely play the bass but be a bass player, projecting more than just my notes and always sounding fresh and alive.”

When he was 22 and living in Richmond, Virginia, Nat joined a band led by trumpeter Tom Mitchell and guitarist Randy Johnston. Johnny Coles, trumpeter for Ray Charles who frequently sat in with the band, convinced Nat to switch to acoustic bass. Without taking a lesson, Nat taught himself the new instrument and quickly developed his own individual voice.

In 1979, Nat Reeves moved to New York City. “I listened, played on the streets, listened some more, and learned. It was at the same time that Kenny Garrett, Mulgrew Miller, Tony Reedus and James Williams also came to New York. We were all friends and played together.” He first toured with Sonny Stitt in 1982 during what would be the great saxophonist’s last tour. That year he met Jackie McLean, who became his mentor.

“Jackie McLean had a major impact on me as both a musician and a man. I remember that he told me that people saw you before they heard you so it was important how I dressed and how I talked to people. He introduced me to Dizzy and Miles in the 1980s. I performed with him on and off from 1987-2004 and he is still a major part of my life. Some of the things that Jackie said to me at the time make more sense to me now than they did originally. I still learn from him and I became a teacher because of him.” 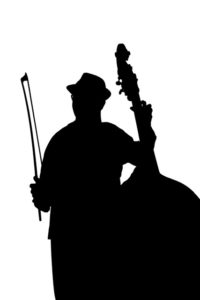 Nat began teaching at the University of Hartford (The Hartt School jazz program was organized and run by Jackie McLean) and the Artists Collective (an arts organization founded by Jackie and his wife Dollie). “I originally felt that I didn’t have anything to teach but Jackie would always say to me that I had to share what I learned. It became something that I do very naturally.” After teaching part-time for years, in 2001 Nat began a full time teaching career at The Hartt School where the African American Music Studies Program had been renamed the Jackie McLean Institute of Jazz. “I build on what my students already know and try to convince them to be more aggressive with learning. I’ve learned a lot from my students particularly about technology. I often teach what I want to learn. I love helping the students. I think of teaching similar to playing a gig: being well organized, accomplishing goals and solving problems. It is a lot of fun and it makes me a better musician.” Although Nat retired from the university in 2021, he continues to teach privately and hold master classes, in-person or remote.

Early in his career, Nat Reeves not only performed with Jackie McLean but such greats as tenor-saxophonist Benny Golson, trumpeter Donald Byrd, drummer Art Taylor and pianists Mulgrew Miller, Kenny Kirkland, Walter Davis, Walter Bishop, Larry Willis and Kenny Drew. He became a longtime member of altoist Kenny Garrett’s group in 1994 and in recent times has worked and recorded with many of the who’s who of jazz including tenor-saxophonists Pharoah Sanders, George Coleman and Eric Alexander, trombonist Steve Davis, pianists Harold Mabern, George Cables, David Hazeltine and Anthony Wonsey, and drummer Joe Farnsworth among many others. Asked which of his recordings are among his favorites, Nat named Jackie McLean’s J-Mac Attack, Kenny Garrett’s Grammy-nominated Songbook and Seeds from the Underground, Steve Davis’ Say When, Joe Farnsworth’s My Heroes and Eric Alexander’s Temple of Olympic Zeus. “I actually like every recording that I’ve been on. They have all been learning experiences. Recording my CD State of Emergency with pianist Rick Germanson, trumpeter Josh Bruneau and drummer Jonathan Barber was a bit of a challenge because we were in the middle of a huge snowstorm and it was tricky getting all of the musicians into the studio although it turned out great. There is more music to those sessions that hopefully will be released someday.”

Nat Reeves has traveled the world including performing in India and Japan, at the San Francisco, New Orleans, Detroit and Atlanta Jazz Festivals, and with Pharoah Sanders at Dizzy’s at Lincoln Center.  At the end of 2019, an event was held in Nat’s honor at the Wadsworth Atheneum Museum of Art – “The Life, Times and Music of Nat Reeves.” In January 2020, Nat and his band traveled to Uruguay to perform at the Punta del Este International Jazz Festival.

Committed to carrying on Jackie McLean’s legacy, Nat also looks forward to leading more recordings in the future and, in addition to playing with many of his favorite musicians, to work more often as a leader, “I’m still busy after moving to Hartford. Now at 66, it is time do more of my own projects.”

Hartt Professor Nat Reeves Kicks off the Year in Style

Jackie McLean Institute of Jazz Associate Professor of Music in Jazz Double Bass Nat Reeves is starting the 2018 - 2019 academic year in celebration. On August 24, 2018, Professor Reeves presided over the sold-out CD Release Party for his second album as a leader, which is entitled "Blue Ridge". The festivities were held in one of the Northeast's premier jazz clubs, The Side Door Jazz Club at the historic Old Lyme Inn in Old Lyme, Connecticut. "Blue Ridge" will officially be available to the public at large on October 1, 2018. The album marks the debut of Side Door Jazz Club Owner/Impresario Ken Kitchings' new record label Side Door Jazz. The album features fellow Jackie McLean Institute of Jazz faculty members Steve Davis on trombone, Rick Germanson on piano and Eric McPherson on drums, as well as alumnus Joshua Bruneau on trumpet and flugelhorn. "Blue Ridge" was recorded at The Side Door Jazz Club itself on January 8 and 9, 2018, in a process which the aforementioned Kitchings described as a true pleasure to be a part of. "Blue Ridge" refers to The Blue Ridge Mountains. Included in this geographic region is Lynchburg, Virginia, hometown of Professor Reeves, who describes the mountains in the album credits as a second home for childhood friend Larry Scott and himself. Professor Reeves also goes on to fondly remember following The Blue Ridge Parkway through the mountains alongside his mother Annie, whenever he returned home to Lynchburg for a visit. Congratulations on this monumental accomplishment in a thriving musical life, Professor Reeves!

Noted for his artful articulation, time, tone, taste and irrepressible sense of swing and fluid invention, Reeves has always been a favorite of all kinds of instrumentalists, but a particularly special favorite of super saxophonists. Included among the roster of pro-Reeves reed players are such heavyweight champions as Sonny Stitt, Jackie McLean(the bassist’s great friend and mentor) and Kenny Garrett. Stitt, McLean and Garrett are just three of the sax czars listed in the busy bassist’s thick resume studded with a galaxy of name jazz performers on various instruments. Among many other eminent saxophone connections are Pharoah Sanders, Rene McLean, Eric Alexander and Houston Person. His resume included work with an array of top performers at gigs world-wide from Tel Aviv to Tokyo, in famous venues ranging from the Village Vanguard to the Montreaux Jazz Festival.